Characteristics of Narcissists in Divorce

Even though there aren’t real “winners” in divorce—with luck, there’s some equitable splitting of responsibilities and assets—that’s not the narcissist’s point of view. He or she is likely to see himself or herself as a victim, regardless of the facts, and has no intention of meeting in the middle.

Studies show this to be the narcissist’s relational pattern—maintaining power and an edge by keeping others off-balance—and he or she isn’t going to change just because you’re going to court. 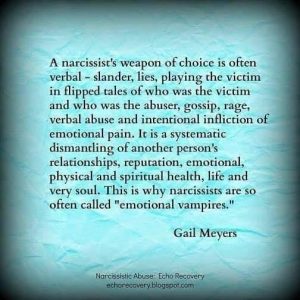 3. He or she doesn’t tally emotional losses.

Impaired empathy is one of the hallmarks of pathological narcissism, and what that translates into here is the narcissist’s total disregard of how anyone—including his or her spouse and, more important, children—might be hurt by the game-playing or other behaviors. It literally doesn’t occur to the narcissist because the focus is solely on him or her; nothing else really matters except satisfying personal needs and wants.

4. By engaging you in a court battle, the narcissist is still using you to feel powerful.

Narcissists need to be in relationships to self-regulate, and by dragging you through court, he or she will feel a thrilling surge of power and control. If the narcissist simply lets you go, he or she would have to find someone else to fill the need. Unfortunately, this also means that the narcissist doesn’t care how the long the process takes—which is surprising but true.

5. He or she wants you to capitulate.

It’s not enough that he can say that he or she won—the narcissist needs a symbolic trophy to prove it and the easiest way to achieve that is for you to fold your tents and go away. Besting other people makes the narcissist feel good, and going to court is often waged as a war of attrition.

How the narcissist changes the nature of the divorce

The likelihood is that you’ve ended up in court because of his or her refusal to discuss terms on any reasonable basis. Going to court and having a judge decide may actually make the narcissist more comfortable because it means he or she doesn’t have to take responsibility for the outcome, especially if it’s not favorable.

Depending on which state you live in, family court proceedings can take a lot of time, and the narcissist will instruct his or her attorney to eat up as much of it as possible. Be prepared for the filing of lots of motions, requests for more time and delays, “emergencies” and the like. No matter which one of you is the plaintiff, the narcissist will be the self-described victim in all of his or her filings, the marriage revisited and retold. The thing is that the narcissist only believes his or her truth, even if it tests credulity. Narcissists may not be averse to lying in sworn documents, even about things that can be easily shown not to be true, because showing that they’re not true takes up more time and paper (and legal fees)—and that’s part of the strategy.