I have always been comfortable meeting with people in broken marriages at any time of stage of the marriage breakdown. Many people know they are ready to end a marriage once they make that first step to talk to an experienced divorce lawyer for advice and strategy. However, some people with a ‘dependent personality’ arguably stay in bad marriages far too long, and can sometimes become victimized by a marriage partner that is controlling or abusive. Many people with these dependent traits are very good and kind people, who simply do not have a good sense of healthy boundaries. One of my goals is to help coach good people in difficult or abusive situations, and engineer a better life for them and their children.

Here is a fine article on what 9 things people with these traits tend to do: 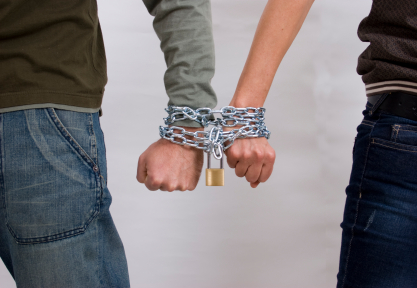 Following are nine traits associated with a dependent personality. They are not always easy to read and identify with, and it is understandably difficult for people to look so deeply in the mirror. Each person will come to a crossroads where they must decide to continue down the challenging path of self-discovery. Those who find themselves dependent-whether on alcohol or drugs, food, gambling, shopping, or relationships-will come to that crossroads.

The key here is everyday decisions. If you’re going to going to make a major life change, of course you would talk over your decision and get opinions from family and friends. But a dependent personality faces everyday decisions from a position of hesitation and fear. The difficulty is the terror of being wrong.

2. They need others to assume responsibility for many major areas of life.

Asking for help from another person in a major area of life is one thing. Expecting that other person to take over responsibility for you is another. People with dependent personalities give up control of major areas of life to another person out of fear.

3. They have difficulty disagreeing with others out of fear.

4. They struggle to start projects or do things on their own.

Dependent people fear exposure because it may cause others to realize how “worthless” they really are. They fear having failures and weaknesses on public display. One way dependent people avoid failure is to avoid taking the initiative. They don’t put themselves out in front of others by taking the initiative or promising results. If they believe they are doomed to fail at a task, they are not motivated to engage in that task; they are motivated to avoid it.

5. They feel anxious or distressed when alone, or when thinking about being alone.

Dependent people often expect the worst. They do not feel competent to live their own lives without others. Being alone means being unprotected and vulnerable. The thought of being alone to cope with whatever “worst” life throws at them is simply overwhelming. Dependent people wholeheartedly believe in Murphy’s Law: Anything that can go wrong will go wrong.

6. They make themselves responsible when bad things happen.

Life happens; things happen. Sometimes those things are bad. Dependent people, who do not sufficiently love or trust themselves, are quick to assign themselves blame for those bad things, even if that judgment is unreasonable. They will commandeer the blame from events, circumstances, and even other people.

7. They feel responsible for fulfilling the expectations of others.

8. They have a high need for validation and approval from others.

9. They are unable to create or defend personal boundaries.

Accepting the truth, though difficult, is the pathway to freedom. The dependent person has spent time and energy trying to hold on to relationships that constantly threaten to slip away. To heal, they must see the value in expending time and energy in establishing relationships based on truth.

Credit to Psychology Today and Dr. Gregory Jantz, founder of The Center • A Place of HOPE.