Sydney Morehouse, 13, of Omaha cries in Lincoln, Neb., Wednesday, Feb. 6, 2013, as she tells the Associated Press how hard it is to only get to see her father every other weekend and Wednesday nights following her parent’s divorce. 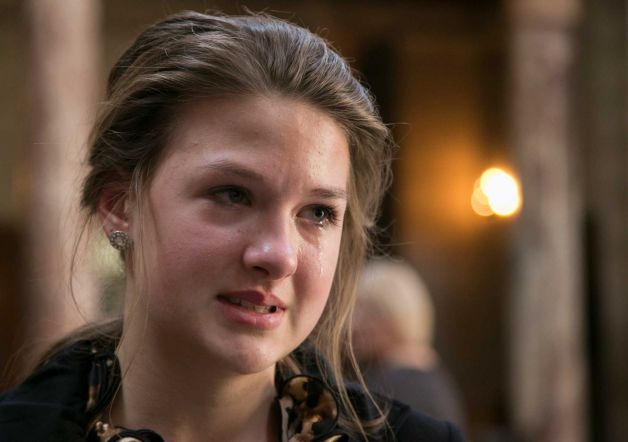 Omaha resident Gary Owens pounded the table and raised his voice Wednesday as he testified before Nebraska lawmakers, demanding they pass two bills that could allow him to spend more time with his son.

A coalition of fathers, doctors and family-law attorneys is asking lawmakers to change a Nebraska parental custody law that they view as unfair to men.

The Legislature’s Judiciary Committee had to open an overflow room to accommodate the advocates who testified in support for two parental custody bills.

“Men should have a right to have custody of their children just as much as their mothers,” Owens said.

Sen. Russ Karpisek of Wilber introduced the first measure that would create a legal presumption that both parents are entitled to at least 45 percent of the total parenting time. If the parents disagree on this, one parent would have to prove with a preponderance of evidence that parenting time should shift in favor of one parent. He said studies show children who spend less than 35 percent of their time with a parent have diminished physical and mental health.

The legislation is modeled after a measure recently passed in Minnesota but later vetoed by the governor. The bill would have increased the amount of time each parent gets with a child from 25 percent to 35 percent.

Karpisek grew up in a divorced family and is a recently divorced parent. He said he and his wife share parenting time and that his children are doing well because of it.

“The time has passed when the sex of the parent is the determining factor,” Hadley said.

However, a legal group for Nebraskans, attorneys and advocated for domestic violence victims opposed the bills, saying they would create more family fighting, reduce child support most mothers receive and could reduce public benefits for poor households. Advocates for domestic violence victims worried women in such situations would have a harder time protecting themselves and their children.

Sen. Colby Coash of Lincoln worried about the impact Karpisek’s bill would have on child support payments. Karpisek said he didn’t introduce the bill to help dads get out of paying child support.

Hasting family law attorney Chris Johnson said judges would take into account the number of days the child spends with each parent and the parents’ income to decide who should pay child support and how much should be paid.

“I don’t care about the child support,” Owens said. “Take all my money. I don’t care. I want my son.”

Omaha 13-year-old Sydney Morehouse asked the lawmakers Wednesday to pass the bills that would help her spend more time with her dad. Before the hearing, she burst into tears when she talked about how hard it is to only get to see her dad every other weekend and Wednesday nights. She hates shuffling between two households and not feeling settled at her dad’s house.

Her dad, Curt Morehouse, said he has been fighting to get more time with her since she was a baby. He also heads a father’s rights group to help divorced dads gain more time with their children.