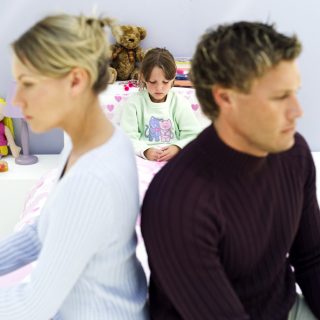 The point to be made here is that during this time of stress and duress we are no longer thinking with our brains, but instead with our hearts. Normally a pure heart will win the day, but a heart which is ruled by the pain, sadness and anger of a divorce will exhibit pure emotion — often in an illogical and dangerous fashion.

In the lead-up to a divorce, many people fail to prepare themselves emotionally and focus mainly on the legal side of the process. This, in turn, makes it difficult for them to control their emotions, setting the stage for even well-intentioned partners to make serious mistakes during the divorce process. With that in mind, we now turn to a quick survey of the five worst mistakes we make in a divorce.

1) Refusing to throw in the towel You should make every attempt to save your marriage. That may include going on another honeymoon, re-engaging in romance, making love much more often, going to dinners and talking and getting couples counseling. But after having made these attempts, if your soon-to-be-ex insists on the divorce, and even refuses to go to couples counseling, then you must let go! It takes two to tango, and certainly takes two to try to save the marriage. You just can’t do it alone.

2) Giving in to withdrawal pains It’s very hard to start a new chapter without a partner that has played a large part in your life, either positively or negatively, for quite a while. We are creatures of habit and it can be difficult to live without that person. We use the term “withdrawal pains” because the habit-forming properties of an intense relationship are similar to those associated with a drug habit. An individual experiencing these withdrawal pains will send constant e-mails, texts, or make repeated phone calls to their ex. This is very ill-advised, though — while it may not be your intention, your former spouse may view this as harassment. Courts don’t like harassment.

3) Dating too early While going through the divorce process, some people medicate with alcohol, some with drugs, and many more through sex and dating. You will certainly feel either lonely or liberated after a divorce, but either way you will want to hook up with someone to get you through this very difficult time, or just to plug the emotional void your partner once filled. It is only natural to get out there and shake your moneymaker. In reality, though, it is simply much too soon to begin dating; you are experiencing too many emotions, and that new person will most likely be collateral damage. You may also put yourself in more emotional peril by making decisions while you are in a state of emotional imbalance.

4) Putting the kids in the middle Everybody needs to have someone on their side, especially during a divorce. One of the biggest mistakes we make is dragging our kids into the divorce conflict, by either bad mouthing the other parent or making it difficult for the other parent to see the children. You know who wins here? No one. Everyone loses, especially the kids who may experience everything from parental alienation to depression and anger.

5) Neglecting to get help Divorce is a difficult process, but it does not have to be a dirty word. The major reason that people find divorce to be so challenging is that they are unprepared for the tsunami of stress and emotion that comes along with it. As I wrote above, people tend not to put enough of a premium on their own emotions, instead choosing to focus on that of their children or their family. By consulting a professional or even opening up to a close friend, we can avoid the emotional anguish that is often associated with divorce.