The Hell of Japan’s Divorce Laws
10/11/2012 By Vincent Poirier
An ex-resident of Japan tells the story of how he may never see his daughter again, as a result of the country’s laws governing divorce 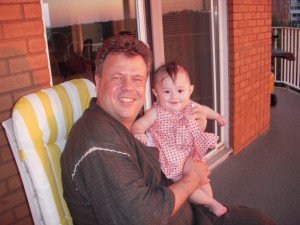 Vincent and his daughter, Emilie
MONTREAL – I need time to heal. I am still raging at my Japanese ex-wife and the way the laws of Japan allowed her to gain custody of our daughter. The shock of the outcome shook my faith in people. After living in Tokyo for 23 years, I moved back in with my parents near Montreal on June 30, 2012.

I met my former wife on the Internet. We were divorced, she in her late 30s, I in my early 40s, and neither of us had children. After dating for a few months she got pregnant. The news was exciting and we eventually got married. Our daughter Emilie was born on February 9, 2011.

However, the marriage didn’t work out. We constantly fought and once the police were called to our house. Then after Christmas in December 2011 my wife returned to live with her parents in Tokyo and took Emilie with her.

The divorce proceedings were inhuman and brutal. I almost died. I walked out of the court mediation in shock and fainted. Luckily, I had asked my father to come for moral support. I had prepared documents that I had professionally translated, and I had hired an interpreter, but I wasn’t prepared for the process. I won’t go into details but the whole process of a contested divorce would have taken two years during which time I would not have been allowed any visits with my daughter. After walking out of the first mediation hearing, I realized the Japanese system was biased towards whomever the child was currently living with.

What I did know is that I wasn’t going to waste my life on what I believe is a rigged process. My dad couldn’t stay with me in Tokyo for the many months it would take in court, so I signed the divorce papers giving my wife full custody of Emilie. I saw what had happened to my divorced friends, how their ex-wives manipulated them or cut them off completely. If I had been employed in Japan, I would have fought on principle, but without a job I didn’t have the financial or emotional resources to do that. I left Japan soon after the divorce, a broken man.

In Montreal, I visit friends and family, I read, I go to the theatre. I wrote a short book on Shakespeare’s plays. I need to get my mind off things and when a friend invited me to sail the Caribbean with him, I said, ‘yes.’ He needs someone to help him with his boat and I need to get away. I almost died and I still need to heal.

My parents are very supportive. In order to function and to be productive and happy again, I have to do exactly as my father says: I have to move on the same way one moves on after losing a child. But I can’t just forget my daughter when I know she is alive, when I know she’s been deprived of her father. I have to juggle my feelings.

I avoid talking about Emilie with friends and family. When asked, I give a very short account but I explain that talking about it is painful. When I talk with friends, it’s difficult for me to get off the topic once I’ve started and it ruins the evening.

I believe my wife and her family treated me in a shameful manner. But I have plans to meet with my daughter again, but I don’t know how I can do it. I am hoping that in the next few years Japan will change its laws and force my ex-wife to allow contact. We’ll see what the future brings.