What Are the Signs of a Malignant Narcissist?

Malignant narcissists tend to display some of the worst traits of both APD and NPD, and often have severe dysfunctions in their personal relationships, work, and ability to function in other areas of life.

Their reckless behavior, disregard for others, and inability to form lasting healthy relationships with others can make them easier to spot than people with fewer traits or more mild or ‘covert’ forms of narcissism.

Here are 10 signs of a malignant narcissist:

One of the main signs of a malignant narcissist is their long history of using, abusing, and discarding people who are no longer useful to them. People closest to them will often see a pattern of broken relationships and friendships, as well as family members and significant others who have become useless or irrelevant to them – often very quickly after they’ve used them to fulfill a certain level of supply. 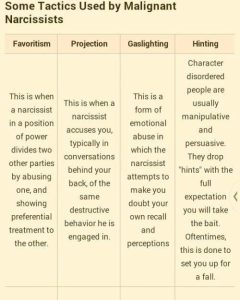 2. They Are Obsessed With Power

Malignant narcissists are often hungry for power, and obsessed with ways to get more of it. They often vie for jobs that afford them this power, and also form relationships with people who are vulnerable enough for them to exert total control over. Because they lack the ability to find power within themselves, they have an extreme need for positions of power to make them feel worthy.

3. Everything Is Personal for Them

To a malignant narcissist, everything is personal. If a friend or family member makes a joke about them, forgets to call them back, or if they are passed over for a promotion at work, they will be deeply offended and angry, triggering a narcissistic collapse.

In the narcissist’s world, there is no such thing as an innocent mistake, oversight, or other explanation for why someone does not treat them in the way they expect (and in their mind, deserve) to be treated.

A malignant narcissist is easily offended and when they are, their revenge can be brutal. People with this personality disorder tend to hold long grudges against anyone who has wronged or slighted them in any way.

Even disagreeing with them, giving them feedback, or questioning something they said can result in swift, anger-filled revenge. They may punish people by lashing out, ignoring them, or even cutting them off altogether.

5. They Take Pleasure From the Suffering of Others

Malignant narcissists can be cruel and even sadistic, seeming to take a sick pleasure or satisfaction in the suffering of other people. They may laugh or mock someone who is having a hard time, intentionally humiliate someone, or use personal knowledge they have against them.

Unfortunately, this also means that they can be predators who will manipulate, abuse, and exploit other people, sometimes for personal gain and sometimes just for fun.

6. Nothing Is Ever Their Fault

Narcissists (and especially malignant narcissists) usually do not take the blame for any of their words or actions, even when they’re clearly in the wrong. Instead, they tend to lash out, get defensive, and find ways to blame other people, even when they have to bend and distort the truth to do so.

7. They Are Ruthless in Their Pursuit of What They Want

Malignant narcissists will often be ruthless in their pursuit of power, wealth, success, or recognition. When they want something, there may not be any line they’re unwilling to cross to get it, even at the direct expense of other people they say they care about. They may lie, manipulate, use, or even attack or discredit other people in order to get what they want.

8. They Don’t Have a Conscience

A lack of empathy or regard for the feelings and needs of others is a symptom of both APD and NPD, and is common in malignant narcissists. People with this personality type will often have no remorse or regret for things they’ve done to harm other people.

Sometimes, it may be necessary to fake remorse in order to get what they want, but typically they will admit no wrongdoing at all and genuinely, don’t feel bad for what they’ve done.

9. They Have Many Enemies

It should come as no surprise that a malignant narcissist will have a long list of enemies, which often includes former friends, lovers, and even members of their own family. People with this personality disorder tend to make enemies easily and often because to them, even the slightest offense can cause them to discard the entire relationship.

Because relationships are only a means to an end for them, it’s fairly easy for them to break off a tie, even with someone close to them.

10. No One Will See Their Insecurities

Deep down, narcissists are extremely insecure, but a malignant narcissist will never let these insecurities show to others. Instead, they will become defensive, lashing out, shutting down, or even destroying relationships when they feel threatened or insecure. Also, they will often mask insecurities behind a facade of arrogance or grandiosity.

How to Deal With a Malignant Narcissist

Unfortunately, the traits and symptoms of malignant narcissism often directly impact other people, especially those closest to the person. When dealing with a narcissist, many people become victims of narcissistic abuse, a specific form of abuse that often involves manipulation, deceit, gaslighting, and being taken advantage of.

The consequences of this kind of ongoing abuse can be devastating, negatively impacting a person’s quality of life, self-esteem, and overall mental health. Often, it becomes necessary to distance yourself from a malignant narcissist, especially if they’ve become abusive or toxic – if you’re in a relationship, it’s probably time to break up.

If this is not an option, here are some other ways to deal with a malignant narcissist in your life:8